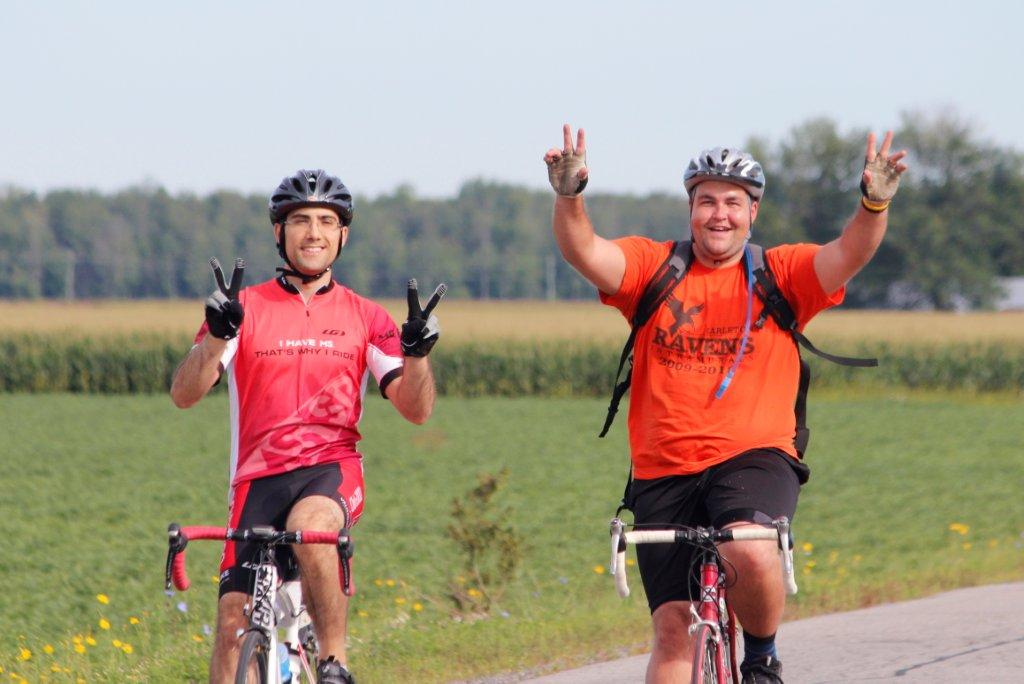 It’s the start of summer 2013, and Ottawa-born Jonathan Allenger, 32 years old and working in the Canadian finance industry is sitting in a hospital room listening to his son Leo’s heartbeat for the first time. “The highlight of [his] life” was taking place less than 24 hours before he would receive a diagnosis of MS.

That same summer, his family uprooted to Toronto’s Greektown-Danforth neighbourhood, where Jonathan’s Italian heritage helped him blend in seamlessly amongst the plentiful gyro restaurants and busy summer festivals (his grandparents immigrated from Italy to Montreal before he was born). He was able to get a transfer at work and hold on to a steady job in the city’s financial district. The fact that the MS clinic at St. Michael’s Hospital in downtown Toronto is the largest in North America made the move less daunting. But underneath it all, he was searching for a way to fight back against MS.

#MSBike: Fighting for a future free of MS

Since that move three years ago, Jonathan relies heavily on healthy nutrition, regular physical activity and stress management to achieve what he refers to as his “normal.” At the same time, he is always seeking out new ways to raise awareness and help other families like his who are touched by MS: he is a board member for his local chapter; he travels back to his hometown every summer to ride in the Ottawa to Cornwall MS Bike with a few close childhood friends; he volunteers at his local MS Walk; he meets with local members of provincial parliament to discuss ways in which the government can improve the lives of people living with MS; and he makes use of his connections in the business world to raise money for important MS research.

“I am biking for Leo, for my wife and for everyone else who is caring for a family member or loved one who is living with this disease. Research means everything to me. Without it, there is no hope for a world free of MS.” 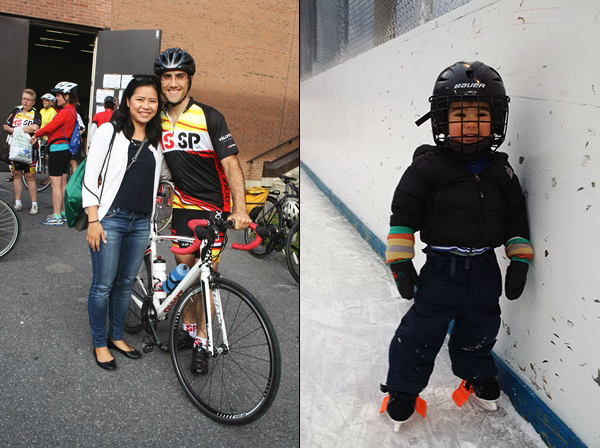 Twenty-five years ago, there would have been nothing available to Jonathan for him to treat his relapsing-remitting MS. Today, there are 11 disease-modifying therapies approved in Canada – 11 options that allow him to keep biking and running after his two-year-old son. And these options exist because since 1990, a long line of cyclists have collectively biked thousands of kilometres – across urban streets, serene trails, beautiful farmland, wine country, mountains, valleys and coastlines – to end MS.

Every summer families from Vancouver Island to the islands of Labrador hop on bicycles, tricycles or tandems and ride anywhere from 25 to 215 kilometres across the most beautiful landscapes Canada has to offer. We do it with one common goal in mind – and because we recognize that these spaces also carry the highest rate of multiple sclerosis in the world. The money raised by these cyclists supports ground-breaking, Canadian-led research into the cause and cure for MS, and tangibly helps Canadians living with MS and their families to lead better lives.

The rich and far-reaching history of MS Bike stretches back to before Trudeau was a household name – Pierre was still serving his first term in our nation’s capital. According to the South Florida Chapter of the National MS Society, it was a sunny summer day back in the late 1970s when Will Munger, former executive director of the Minnesota Chapter decided to bike home from his father’s house with his son in tow. They overestimated their pace and endurance and attempted to ride the 150 miles in a single day – stopping short and staying at a hotel. The next day they completed the ride and in their conversations along the road, they concluded it would be a unique way to raise funds for MS.

The next year, 200 cyclists took that same route and raised $33,000. By 1985, chapters across the country had adopted their own routes as annual fundraisers and the dollar amount had grown into hundreds of thousands. By 1989, the first organized bike event took place in Canada, and today there is at least one event in every province – raising millions of dollars annually in support of all people affected by this disease. Our events are inspired by our cousins to the south – a Canadian answer to the question: will you flee or will you fight?

We have worked together to grow MS Bike into the largest cycling series in North America. Now, Pierre’s son is in office, Jonathan’s son is nearly potty-trained, and MS Bike stands as a reflection of the convergence between a strong bike culture and our dedication to ending MS.

For those who have attended any MS Bike event, you know well that the experience is physically demanding. Jonathan’s route takes him up country roads, through farmland as far as the eye can see, and across to the St. Lawrence, heading east into Cornwall along the water for about 30 kilometres. Riding alongside hundreds of others – many of them with the same sign on their backs: “I ride because I have MS” – helps Jonathan to reflect on his condition, and on the place of MS in Canada.

“I know that as a whole people don’t like to disclose their MS diagnosis out of fear. I’m of the opinion that that type of attitude is holding us back a little, as a society. Today, an MS diagnosis might not be something one wants to hear, but it’s not the end of the world either. People with MS all over the world are living fulfilling lives – they have professional careers, families and travel the world. The fact that sometimes we need certain accommodations doesn’t mean we aren’t fully contributing members of society, with the drive and ambition to make a significant difference, in whatever pursuit we’re undertaking at any given moment.”

This year marks Jonathan’s third year riding. In 2014 he raised more than $10,000 “due to an outpouring of support and generosity from friends, family and co-workers.” In 2015 he decided to ride events in Denver, Colorado, Prince Edward County, Ottawa and Niagara (which he had to drop out of at the last minute due to a personal injury). His goal was to raise another $10,000 and he shattered it. This year he is looking to add at least another $10,000, breaking the $30,000 mark since he started riding three years ago.

“When the MS Bike ride started in Canada 27 years ago, a person’s quality of life following a diagnosis of MS was significantly different than it is today. With so much progress made over the past 26 years, it’s important to keep pushing forward towards the goal of ending MS entirely.”

We couldn’t agree more. This #MSBike season, join Jonathan and the thousands of other Canadians who are riding for a world free of MS – and tell us why you ride in the comments below.