This year I was so excited to be the new spokesperson for the Johnson MS Bike — Leduc to Camrose. I’m even more proud now that I know the tour, which happened on June 13-14, raised a whopping $2 million to support people like me, who live with multiple sclerosis every day. Knowing I have that kind of support behind me means more than you can imagine.

My first encounter with MS came at a young age; I remember seeing my neighbour out walking every day, and I asked my parents what caused her to limp some of those days; they said she had MS. It wasn’t until 15 years later that I really understood what I saw, and what my parents had told me. Every day my neighbour went for her walk, she was making a choice to fight MS. I made that same choice 15 years later, sitting in an emergency room, blind in my left eye.

Everyone who rides in the MS Bike tour makes that same choice. As a participant, as a volunteer, as someone living with MS, as someone with a loved one with MS—whatever your connection is, when you decide to ride, it’s because you know that together we can end MS. 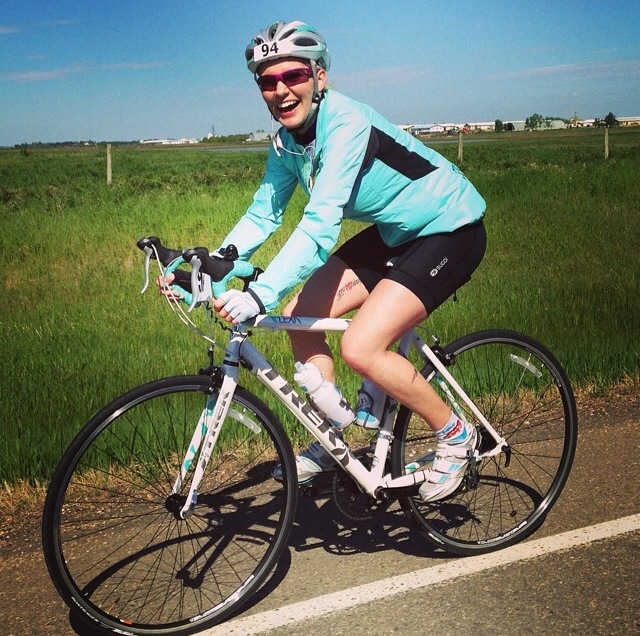 My first MS Bike tour in 2012 came a few months after my diagnosis. I knew something was wrong when I began to lose vision in my left eye at the end of December 2011. It took about a week to go from soreness to blurriness to blindness. Throughout the long process to receive a diagnosis, I had spent so much time hoping for the best but preparing for the worst. When I finally heard those two letters—“MS”—I want to say I was ready for it, but I wasn’t. All I could do was think, what now? What is my life going to look like?

From the moment doctors mentioned MS as a possible cause of my blindness, I thought of the MS Bike tour I had always heard about. I will never forget that first ride in 2012, because that first year I rode alone. No team, no one to ride with. I had the support of my friends and family at home, but I felt alone. I didn’t know if anyone could understand what I was going through.

I want people to know they are not alone. The journey with MS is not an easy one, sort of like the MS Bike sometimes. Sometimes the ride can feel long, sort of like the recovery from an MS attack. But then you see all the support on the ride: the smiling volunteers at rest stops, the mechanics fixing a flat tire—and you realize you can keep going, you can do this. You can get through it, just like people living with MS fight through it every day. People living with MS do this ride every day when they choose to live with and fight their disease.

Advocacy and research, made possible by amazing people who participate in the MS Bike, has the potential to one day change “could” happen into what “won’t” happen. To me the MS Bike means that a girl can be diagnosed with MS at 23, but she’ll be told it’s completely treatable or that it can be fixed. It means that her life doesn’t have to change, that she doesn’t have to prove that she is still the same person. It makes me believe that one day I will be able to say that I used to have MS.

Consider registering for an MS Bike in your area at msbike.ca. Thank you in advance for joining #TeamFight to end MS.

Patrycia Rzechowka has raised nearly $30,000 for people living with MS through the MS Bike tour. She lives in Edmonton, AB.