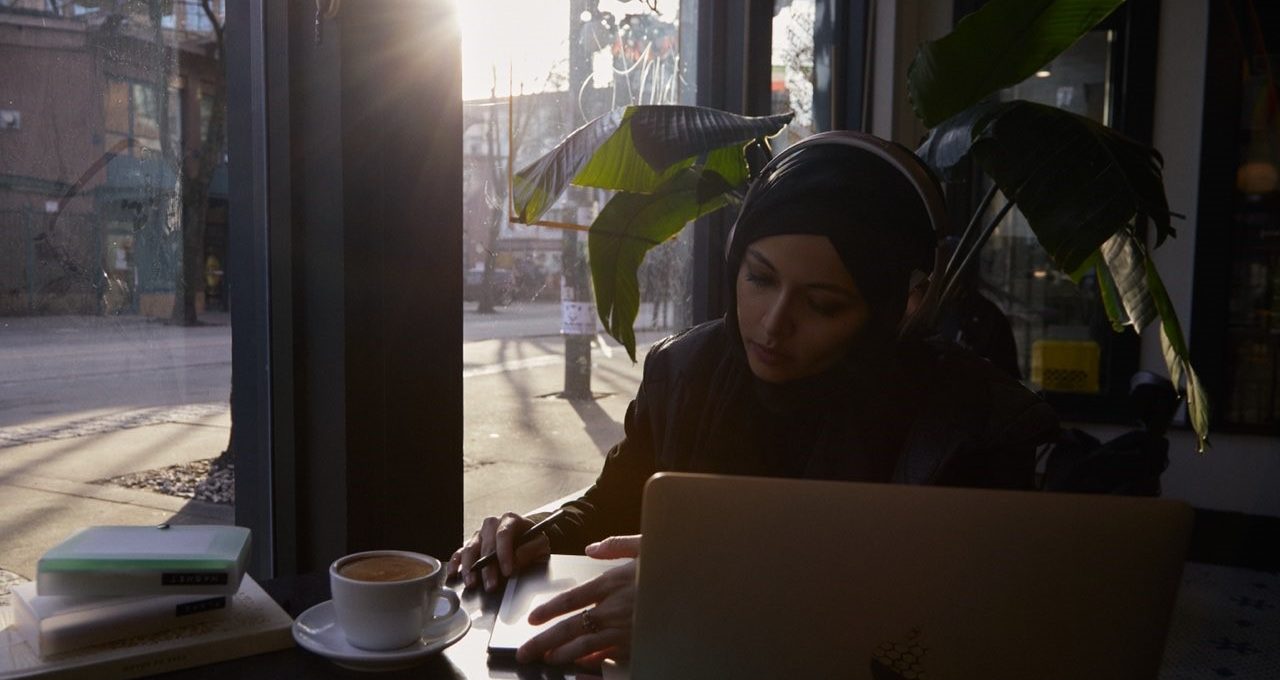 Imaan Waja is a labour and delivery nurse with a passion for all things fashion and design, hiking with her husky, Kuruk, and exploring in her Jeep. She is also a proud Muslim who grew up in Northern Ontario and is passionate about encouraging other women to show up authentically in all spaces. She’s currently embracing the opportunity to experience British Columbia.

Tell us about yourself. How did you get into nursing?

I grew up in North Bay, Ontario. I was a Muslim girl in a primarily Caucasian community. Until I started high school, I was the only brown girl in my class. I was the odd one out in that way, but my mom always encouraged us to celebrate our differences.

After high school, I did a four-year undergrad in biomedical sciences, with the initial intention of going to medical school, as both of my parents are doctors. I decided to pursue nursing instead, but also wanted to explore my artistic abilities, so I studied fashion and sewing on the side in the evenings. I was busy, but I always had so much energy–so much that my friends often referred to me as the ‘energizer bunny’.

Can you tell us about your MS story? When were you diagnosed?

It was October 27th, 2016. I had attended a career fair and by the end of the day, my left foot was a little numb and tingling. I just thought that I had been on my feet for too long. I still had that pins and needles feeling when I got home, and it had travelled up to my knee by that point. I mentioned it to my mom, and she said it was probably from the boots I was wearing (my favourite boots that she happened to hate). She told me to throw the boots out, but I wasn’t convinced that it had anything to do with them.

Two weeks later, the tingling was still there and had now travelled all the way up to my ribs. I was visiting my parents, so I mentioned it again. Even with their medical backgrounds, neither one of them considered multiple sclerosis (MS) initially.

My dad thought the numbness might be the result of one of the many sports I played. He always encouraged us to play sports and be active and in tune with our bodies. He thought perhaps I had pushed too far and suggested I try relaxing in the hot tub. My mom, on the other hand, quickly started to worry and suspected I might have a tumor on my spine – the complete opposite reaction to that of my dad! Given my parents’ connections in the medical field, I was fortunate to get a last-minute appointment for an MRI.

Later that day, my dad came home from work early, something that never happened. I remember hearing him slowly walk up the stairs. He sat on the edge of the couch and made small talk about the show I was watching. I thought, It must be really bad if he’s sitting here watching “Gilmore Girls” with me. He started crying and told me that the MRI had shown lesions in areas that indicated it was MS. I had only seen my dad cry once before that day.

I am so grateful to have received an MRI and diagnosis quickly, largely due to my parents’ involvement in healthcare. I know the majority of people who end up with an MS diagnosis wait months for an MRI to confirm a diagnosis.

How did your family, friends, and community react when you told them that you had MS?

I am fortunate to have a lot of medical professionals in my family, so my parents initially reached out to those individuals and then slowly started telling others. Family and community are an important part of Muslim life. There is a reliance on your family and community not only for support, but for prayer as well.

In the Muslim community, hardships are viewed as tests to overcome, instead of a punishment you suffer. Muslims are generally accepting of difficulties in life. How you deal with hardships strengthens you as a person and your community rallies around you with love, empathy, understanding, and prayer. People will offer to drive you to appointments, cook for you, and help look after you.

Describe the symptoms you experience(d) and how they impacted your day-to-day life.

The first symptoms were tingling and fatigue. I also experienced intense itching on my hands and shoulders. It was so bad that I wanted to scratch my own skin off. It would last for a few days and then just stop completely. I also experienced vertigo that was so overwhelming I couldn’t open my eyes and my spatial awareness was gone. After my diagnosis, I moved back to North Bay to live with my parents. That really changed the trajectory of my life, as I had planned on staying in Toronto to work as a nurse and continue to pursue my fashion and design dreams.

What does living with MS look like as a Muslim? Are there differences that other people might not think of or consider?

When it comes to Islamic prayer, movement – standing, bending, putting your forehead to the floor – is a key part and that may not be accessible, depending on your symptoms and disease progression. Of course, if you are unable to do these things that’s ok. There are allowances and modifications you can make. You pray the best you can, and God will meet you halfway.

If you need outside support like homecare, it can be tough as the personal support worker may not necessarily understand the priorities of a Muslim, especially if it’s not always the same person coming to your home. Modesty and rules around the opposite genders interacting means that having someone of the opposite gender (outside of family members) help dress or bathe someone, may be inappropriate. With the limited control someone has over the gender of a personal support worker, or when the worker arrives to assist, this could cause a lot of stress to a person who relies on homecare.

I’ve been athletic my entire life, but I re-evaluated my exercise routine and diet when I was diagnosed with MS. I am more consistent with being active and doing small muscle training. I do Pilates and have incorporated prayer into my routine. In terms of diet, I eat more whole foods and rarely eat anything processed. I thought I was in tune with my body before, but I realized that I am so much more in tune with it now! I also stopped putting in so much overtime and embraced a healthier work/life balance.

How does prayer integrate into living with MS, an unpredictable disease?

Prayer is an important aspect of my day-to-day life. In university, before my diagnosis, I started having panic attacks and prayer was a way I learned to control them. For me, prayer plays a large role in reducing my anxiety and gives me strength and motivation. Looking at my MS as a test, not a test that I have to get 100% on, but a test of ongoing growth, helps me day-to-day. My faith helps me remain positive and appreciate every moment, because you aren’t owed any particular moment in life—you just get to have it and experience the moment to the best of your abilities.

Prayer allows me to believe there is a greater being who shares responsibility for my life. A being who almost knows what the best, most beautiful version of my life could be and is trying to guide me through it. It does not mean that being will give me a life without hardship though—what good story lacks struggle?

As humans we want to control everything, and I relinquish that ultimate control through prayer. When I pray, I am saying that between now and the next time I pray, let me live a good life, I will handle the struggle I am given, and we can do this together. In many ways, faith combined with prayer helps me not fixate on the anxiety of what could happen in the future.

What does Ramadan mean to you? What would you like others to know in terms of its purpose, traditions, and customs?

Ramadan is one month out of the year where you’re hitting the reset button. It’s a time of reflection and is something between you and God, where you strengthen your faith and beliefs. Essentially, it’s a spiritual reset and reevaluation of the habits you have built up over the year. Over the 30 days, you focus on reestablishing priorities. Fasting is also a big component of Ramadan. When you take away food and drink for a good portion of the day, your brain doesn’t need to think about those things and it’s amazing what you can accomplish! It also provides perspective on those things which we perceive as “great struggles”. When the hunger and thirst pangs hit, you realize that this is a reality for many people in the world. For them, merely surviving – not even trying to thrive – is their focus. Ramadan really brings perspective to your problems.

We start fasting when the call for the morning prayer goes out, and then the fast is broken after the sundown prayer. It’s self-directed, and when your community is doing it with you, it makes it a lot easier. We all do it at the same time, individually, but also together.

There are writings in the faith of how to break your fast and then there are things that are more cultural, like traditions of what foods people eat when they break their fast or how to decorate and dress at the end of the month. We have a celebration called Eid al-Fitr, which means “Festival of Breaking the Fast.” You dress up and families exchange presents, eat, drink (non-alcoholic, of course), and play games.

If you are unable to fast due to your MS symptoms, how does that impact your feelings around Ramadan?

Having MS can make it difficult to fast at times, because of the brain fog and fatigue I experience, especially when I am working. I need to listen to my body, so there are times when I will fast for two days and then give my body a break. There are allowances for people who are sick, pregnant, or have medical conditions. When someone is unable to fast for those reasons, you have the option to ‘make up those days’ by fasting at another time of year or you can choose a payment called fidya (fidyah) that is equivalent to providing two meals for someone in need.

It’s definitely a shift in perspective and change in mentality. I remind myself that I’m still fasting, I’m just not doing it at the same pace as everyone else, and that’s ok!

What advice would you give someone who has been newly diagnosed?

The initial fear and enormity of the diagnosis can be overwhelming, especially as you try to understand what it means day-to-day for you. Reaching out for support and education is so important. Read as much as possible and try to stick to evidence-based information.

Connect with the MS community. It’s comforting to be able to talk about MS with people who truly understand, even if they haven’t experienced the exact same symptoms. I have attended a few MS Walk events and it’s great to make those connections.

My mom always says to look for the small miracles, they are the things that often matter the most. So find your small miracles and make them matter.