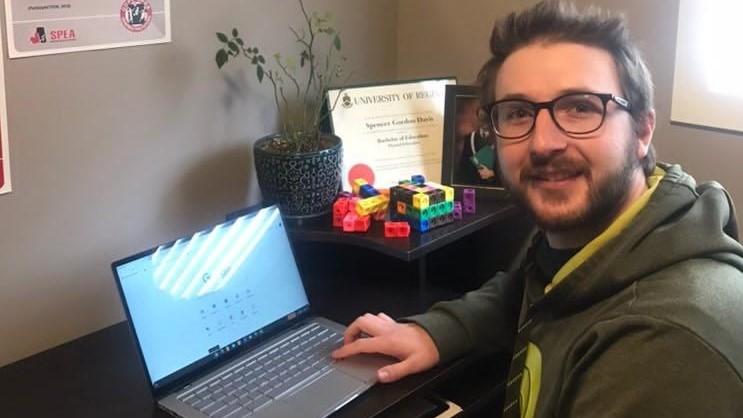 Most teachers remember their first year in the classroom. For Spencer Davis, a first-year teacher who was diagnosed with MS last year, the 2020 school year is surely one he won’t forget. He’s starting his career teaching students who’ve opted to participate in the cyber school program as a result of the pandemic.

“It’s been such a whirlwind. During my last two months of university, we converted to online courses. When I graduated, it didn’t really feel like I was done. My program just kind of ended. After that, with COVID still a reality, I didn’t think that teaching was going to be a possibility for me. In fact, I had kind of given up on the prospect of teaching this year. And then I found out that the school division where I’d interned was recruiting online teachers. I felt extremely lucky when I got the job.”

Much like the unpredictable events of 2020, Spencer’s school year started in an unconventional way. On his first day of school, he wasn’t in front of his computer in his make-shift home classroom.  Instead, he was in a hospital chair in Regina, receiving another round of his infusion treatment for his MS. The next day, he was back to welcome his students to another school year.

Spencer received his MS diagnosis in 2019 during his in-classroom internship. As the year went on and the pandemic reached critical levels in North America, he had come to terms with the idea that he may not be comfortable accepting an in-person teaching job after graduation. However, when he saw the position for a cyber school teacher at the same school division he had interned at, he jumped at the chance. He’s currently teaching in the Chinook School Division, which consists of 62 schools in the southwestern corner of Saskatchewan.

“Most of the communities in Chinook School Division have one or two families that decided their kids will attend the cyber school option instead of in-person classes. I have 18 students now, all from the southwest corner [of the province]. I teach grade nine. It’s not identical to what a regular school day would be, and I’m mainly focusing on the core classes.  From Monday to Thursday, I’m teaching English and math in the morning, and then social studies and science in the afternoon. Fridays are typically project days or focused on art or physical education.”

While Spencer only finished a month of teaching, he could already see some of the immediate impacts of COVID-19.

“One hundred and ten days have passed since students were in the classroom. That’s a long time not to be with their friends or to have a structured education that everyone is accustomed to. There’s kind of a buzz around the students that you don’t usually see because they went so long without school. Now they’re back – and they’re excited! I think there’s that deeper appreciation now for education. But I would also say just in general that there’s a deep appreciation for a lot of things that we took for granted before COVID-19 hit.”

Before the pandemic began, Spencer had finished his Bachelor of Education with a specialization in physical education. Spencer had been involved in sports his whole life, so it was a natural fit for him to focus on that area as a specialization. He’d had several strange but transient symptoms over the five years before his diagnosis, but it wasn’t until one day in the gym that he realized something was off.

“During my internship, I was teaching a physical education lesson on evasion tactics, like footwork. I began to start running and my legs gave out on me. I thought, ‘What just happened?’ My legs don’t just give out from trying to run.’ So I got back up and I tried to run again, and my legs gave out on me a second time. A little while after that incident, I got the phone call confirming I’d been diagnosed with MS. I was just about to start my career as a phys. ed. teacher, relying on my body to teach half the time, and suddenly, lost my ability to run at that point. Everything just kind of seemed to be collapsing around me.”

Luckily, starting treatment right away was very beneficial for Spencer.

“I am incredibly lucky to have the health that I have right now. This whole experience – adapting to online education – has made me see that I’m able to teach, even if one day, I’m not able to teach phys. ed. I can still transfer the knowledge I have about teaching to other classes, so this experience has been a huge confidence boost.”

While many wish to go back to ‘normal’, for some, returning to  normal isn’t an option.

“We need to keep in mind as a society that you aren’t necessarily protecting yourself. You’re protecting the elderly, you’re protecting the immunocompromised, and even after the pandemic, I think that’s something we all need to keep in mind. Even if we are lucky enough to have good health, you have to watch out for your neighbors and everyone around you because in the grand scheme of things, you’re pretty small in this seven-billion-person world.”