I’m an activist in my community, and I’m proud of that fact. I advocate for causes that are important to me, which include issues that affect people living with multiple sclerosis, young people in my community, and animals. I have two rescue dogs – my one guy Gru is a shepherd cross, and my little girl Meeka is a Blue Heeler. Gru was in rough shape when I rescued him and became very ill the following year. I took him to the doctor, who discovered he’d previously been hit by a spray of shotgun pellets; one shifted and caused a serious infection. After many surgeries, he survived – he’s a fighter like me.

I was diagnosed with MS on January 19, 2012 at age 23. It was my brother’s birthday. When my doctor told me I had MS, I cried for a minute and turned to my mom. Looking at her, I knew she would take my diagnosis the hardest, and I remember thinking, I need to be strong for her, it’ll only make things worse if I give up in the very beginning. From that point on, my world revolved around finding good information about MS and what I could do to fight it. It took me a while to recognize that I’m not a different person because of my MS, and if people are going to have a problem with my MS, I don’t want them in my life.

My first major symptom was severe optic neuritis – I went blind in my left eye. The steroid I was put on made me sicker than I’d ever felt. My vision improved to the point where I could see, but it was still very blurry.

I started doing yoga. I tested it out because it’s low impact and it’s the one thing that’s helped me recover. I’ve always been interested in high-impact activities, but when I was diagnosed I was told I probably shouldn’t run, among a list of other activities. I was skeptical and thought it would be boring, and all about breathing – why would I do this? My friend told me she took a class focused on strength, so I checked it out and developed a love for it and all kinds of yoga (though I avoid hot yoga because it’s advised to keep away from the heat when you have MS). 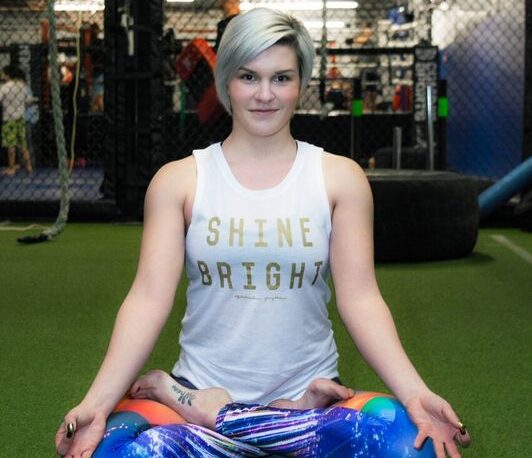 At the end of the classes the teacher told us, “Direct your breath to where you have an injury or towards an issue you’re facing.” My initial reaction was, “Okay, whatever – let’s see what this does.” After going to the class four times a week for two weeks and focusing on my breathing, the blurry vision I’d been experiencing for five months went away. Last year I had a similar attack, chose not to take the steroid, continued to stay active and practiced yoga more frequently, and had the same result. I’m not sure if it’s a coincidence, but without a doubt it’s helped a lot — it’s about allowing yourself to relax and simply breathe.

Since my first ride in 2012, my involvement in MS Bike has become deeper every year. The first year I cycled alone, but at this point I could ride with all the teams because I’ve grown to know most of them. I wanted to get more involved so I became the spokesperson for the Leduc to Camrose event, and I’ve grown from a timid rookie, riding all by myself, to the point where I couldn’t imagine not being involved.

The first year I participated I went to early pick-up to grab my rider package and jersey. Because I have MS, I picked up the red jersey that reads: “I have MS, that’s why I ride”. As I was turning around to leave, another participant asked me why he didn’t get a red jersey. I explained that I have MS and chose to wear this one instead. He let me know that he’d been doing the ride for years, never knew anyone with MS, and just does it for the challenge. We chatted for a while and I learned that he raised a substantial amount of money for someone who didn’t know anyone living with the disease – I thought this was so cool! He told me to hold on a second and grabbed one of the rider’s bibs where you can fill out who you ride for – he wrote “Patrycia”. This is a moment that will stick with me for the rest of my life.

This experience really opened my eyes up to the variety of people who ride. There are those who ride because they have MS or a family member does, and then there are the ones who do it and don’t know anyone, and are still really passionate about ending MS. It’s given me a new hope that there are so many Canadians from all walks of life fighting this disease, and we need to recognize those people as well. 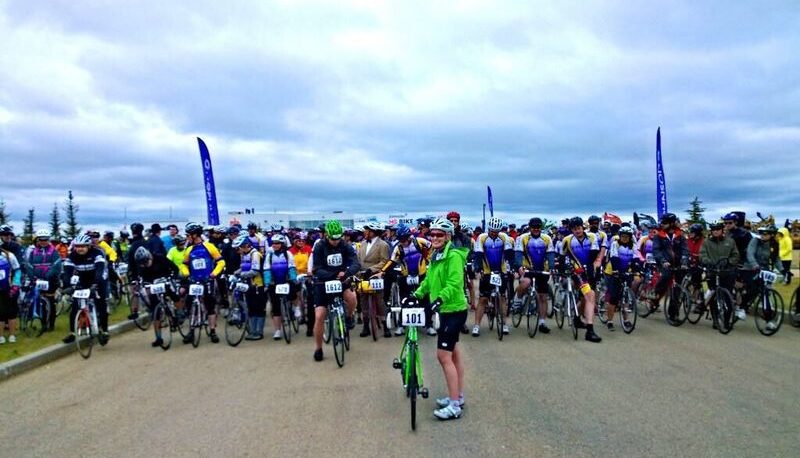 MS Bike is a good challenge for some and a great training ride for others. There’s not an outrageous fundraising minimum you need to raise like at most other bike events. It’s also very well supported, so if you’re not a seasoned cyclist there’s people along the route that can help. If you can’t finish the ride they’ll pick you up and take you to the finish line. You end up spending the weekend with really refreshing likeminded people. It’s a really positive experience and if you come out this year I guarantee you will leave feeling uplifted!

Patrycia’s our MS Bike ambassador in Alberta. She loves yoga, owns two rescue dogs and is an inspirational leader in the fight to end MS.

We’ll be sharing more stories from other #MSBike ambassadors across Canada leading up to #MSBike. Join Patrycia by joining #TeamFight register for your local #MSBike today at msbike.ca. Tell us in the comments: who do you ride for?