I want to take you to the beginning when it all began for me, because that is where my story begins. Where any story really begins, I suppose. At the beginning.

When It All Began

I had my first attack in March 2009. I was 18 years old and in my first year of college in my hometown of Toronto, ON.  I was in Hawaii for a cheerleading competition with my team. I was beyond excited to be with my friends, to cheer and to just see the sights.  The last day there, I noticed my left eye started to feel almost heavy. It was kind of blurry but more so, just a weird feeling. When I looked down I couldn’t see anything. We had been out in the hot sun all day and I joked with my friends saying I sunburned my eye!  It hurt a little bit and was annoying, but I didn’t think anything more about it. I just thought it would go away. After a 12-hour flight home, my eye was still bothering me but I just attributed it to exhaustion and told myself it wasn’t a big deal.

I ignored my eye and settled back into my regular routine. I went to classes, hung out with friends and just carried on with my life. But my eye didn’t get better.  Finally, I told my parents. My mom thought I had torn my retina and promptly made an urgent appointment for an eye exam.

During the appointment, the eye doctor said I had lost peripheral vision due to nerve damage behind my eye. He wanted me to see a specialist as soon as possible. Tests revealed an inflamed nerve right behind my eye that was cutting off my vision entirely but they were not sure why this was happening to me. They ordered blood tests and an MRI scan to investigate further and to get me answers.

I started the whole doctor process in the first week of April 2009 and was diagnosed with Relapsing Remitting MS on May 28th, 2009. It was only a month and a half after the whole process started, which I’ve been told is awesome and really lucky. Once I got the diagnosis though, I went through a grieving process. I dropped out of school, quit cheerleading and started working full time. It was anything to get the diagnosis off my mind and feel a bit normal.  I felt a bit lost. I was miserable but at the same time, I didn’t feel miserable. I felt numb. It was a weird experience.

My mom became my guide, taking on everything, including making decisions about my treatment and therapies.  She did everything and I was grateful because I just didn’t feel that I had the energy to take care of myself.  She could listen to the doctors and understand what they were saying –  I would just sit there and stare, not comprehending a lot of what they were saying, so I let my mom take care of it all. It was easier that way and I felt safer having her there.

I started a disease modifying therapy called Copaxone, which was a daily injection. I was on it for about three months and then decided it was too much. I wasn’t going to spend the rest of my life stabbing myself with a needle. That’s not how I wanted to live.  I stopped taking it and was fortunate to get into one of the first trials for an oral medication called Gilenya. I had no side effects and I finally felt like I was just living my life.  I was normal again and all I had to do was take a little pill!

I was healthy for three years. During that time, I could ignore that I had MS and just be who I wanted to be. No one had to know but those who I felt comfortable telling. I was living my life my way. But in 2012, I was diagnosed with severe anxiety and chronic migraines. I’m not sure if this was connected to my MS, but I could still move ahead with my life. I applied to Mount Saint Vincent University in Halifax, Nova Scotia and in September, I moved there, to a new home and started a new life.

Life was good at first but during my first week of university, I got a cold and lost the vision in my eye again. It was a little wake up call for me I guess. I realized that my mom wasn’t there to take care of me like she had before and that I had to deal with this on my own. So, I took control of my health. It made me feel more independent, like I could take care of myself, and that I was going to be okay.

MS is funny.  There are so many little things they don’t tell you about. When I was trying to figure out what was going on with my eye, the doctors said it was probably because of my cold that my MS symptoms had flared up. When you’re diagnosed, they don’t tell you that if you get sick and your immune system gets lowered, you can have relapses or get new symptoms of MS.

I went home at Christmas and in the summer and continued to see my doctors there.  My health had improved and I felt good.  I decided to take my independence further and got a doctor in Halifax so I could get help when I really needed it.  I took a stand with my own independence and finally felt like I was in control.

Backtrack just a bit… I met Mike in March 2013. We started dating when I was feeling very healthy. I even told him on our first date that I had MS, and played it off as no big deal. He didn’t say much, which was great, and it didn’t impact us getting to know each other. We moved in together a year later and got married in July 2016.  Last year, we decided to expand our little family and are now trying to have a baby. 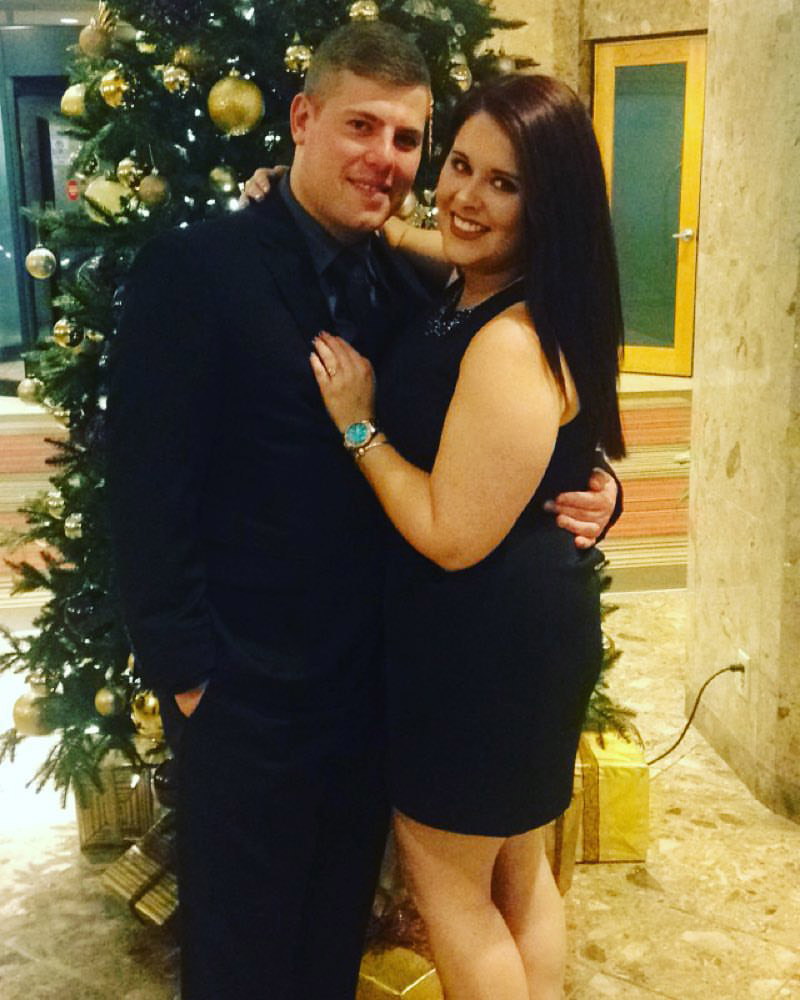 The idea of getting pregnant was a big step for me. I’m not worried about my MS affecting my child as much as I am worried about it affecting the progress of getting pregnant. I feel like there has been a lot of research about getting pregnant while living with MS, but everyone’s situation is so different. Mike and I have been trying to get pregnant since February 2017, so it’s been almost a year. I don’t necessarily blame my MS, but at the same time, it’s always on my mind. I went back on Copaxone injections because it was safe to take this therapy while attempting to conceive and during pregnancy where as Gilenya is dangerous to be on when conceiving. So, in addition to the stress of not getting pregnant, I am also dealing with these injections that I really don’t like. That part sucks. But I feel it is worth it to finally have a baby of my own!

I’m comforted to know I have a great support system set up for when I do conceive.  I have my husband, my family, and Mike’s family.  They are all out-of-this-world supportive of everything, which means a lot. It’s great to know that I can count on such caring people who love me and are so willing to help out with anything.

In the summer of 2017, after Mike and I bought our first house, I started to lose feeling in the bottom of my foot. It slowly progressed up my leg and up to my ribcage. When I look down it feels like shooting electric shocks go through my body. I think this could be attributed to an inflammation, or lesion, on my spinal cord. I will soon find out if I am correct and if my MS has progressed from attacking just my optic nerves then it is now affecting my spinal cord.

When I was having my relapse last summer, I went home to see my parents. I saw my neurologist who put me on 25 steroid pills a day for three days. It shocked the nerves in my legs and brought them back to life. But it was very painful.  I sat at my parents’ house for three days in the fetal position, crying. The pain was overwhelming but so was the feeling that I had of not being myself.  There was so much I wanted to do while I was home.  I just wanted to be normal again.

MS Is what I have, Not Who I Am

MS is the weirdest disease and I feel, for me, it is just an adjective. It is not who I am, but just a part of me.  I try not to freak out when something happens. Like when I lost the feeling in my legs, I could still do things, I could still walk but I just wasn’t completely me.  I know things like that worry Mike and my parents, but for me, it’s just part of this journey that I am still getting used to.  There’s no cure for MS yet, so I do my best to move forward.  There really is nowhere to go but forward, and that’s a positive thought for me.

Part of me likes the discreetness of having MS.  People who know about my disease will ask how I’m feeling and I know what details they need or want to hear.  When I meet new people, they have no idea that I have MS because I ‘look fine’.  I’m okay with that because I don’t ever want to be “the girl with MS”.  I want to be Charlotte – the girl who works full time, goes to the gym, hangs out with friends. I do everything I can to stay normal but, like many people, I have good days and bad days and sometimes only I can see it and I can tell who I want to tell.

I live with MS but it’s not who I am. I am Charlotte – daughter, wife, friend, and hopefully soon, mother. 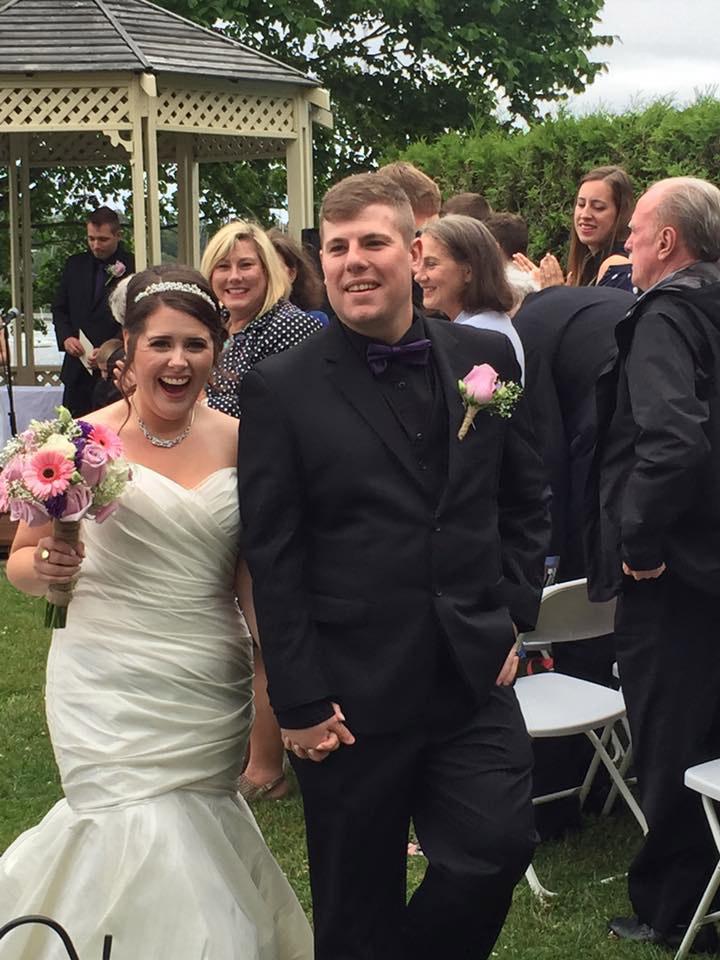