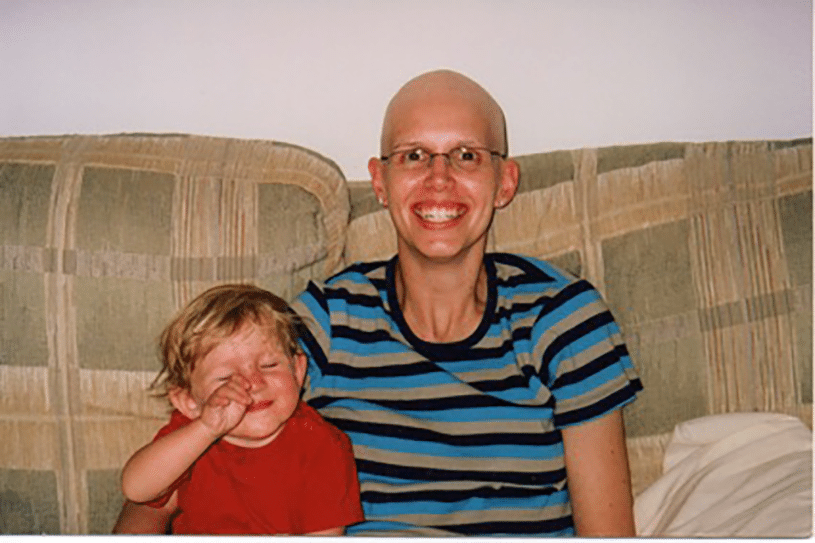 Still, knowing what I know now, I would do it all over again.

I won’t sugar coat this: the trial was hell. For three years, between 2002 and 2005, my life was a series of questions, tough decisions, and uncertainties. My body didn’t feel like my own. At one point I was taking 129 pills a day, and my stomach lining was so eroded that I couldn’t keep food down for a year. Destroying your immune system is no easy feat.

But now, here I am: walking, skiing, kayaking. Independent, working full time, married after having danced at my wedding. I have been living relapse-free for 14 years, and it’s because of the Canadian Bone Marrow Transplantation (BMT) trial conducted by Dr. Mark Freedman and Dr. Harry Atkins at The Ottawa Hospital.

The BMT trial is responsible for a new immunoablation and autologous hematopoietic stem cell transplantation (IAHSCT) option for people with an early, aggressive form of multiple sclerosis, like the type I was living with in my early 20s. Five years after being diagnosed with MS at age 21, I had declined so rapidly that I was living at The Ottawa Hospital Rehabilitation Centre under constant care. Dr. Mark Freedman, my neurologist and lead investigator of the BMT trial, told me my MRI scan looked like a cheese grater – there were so many lesions on my brain that my nervous system looked like it had been shredded by MS.

That was the moment I became eligible for the trial, and I rallied my then-boyfriend Aaron and my family to review the consent form, line by line, risk by risk. Dr. Freedman was straightforward about the difficulties I would face at each stage of the trial, first with the harvesting of my stem cells, then with the chemotherapy to completely wipe out my immune system, then with the transplantation of my stem cells back into my body (with a new consent form for each stage!).

I had made the decision to participate in the trial expecting not that I would get better, but rather that I wouldn’t get worse. I wasn’t supposed to get better; even so, I decided it was worth the risk to prevent further progression of my MS.

At each stage, the trial became more and more difficult until the point of no return: 10 days of chemotherapy. I remember receiving treatment on the leukemia ward at the hospital, and needing to explain to others that I wasn’t receiving chemotherapy because I was dying of cancer. I began to feel undeserving of the treatment, because it wasn’t meant to save my life. I sank into a deep depression, and I was prescribed anti-depressants to cope with the unexpected mental effects of the treatment.

The worst thing that can happen in a clinical trial did, in this case, happen: another participant in the trial, John, died as a result of a liver infection caused by the chemotherapy. I met John before I was readmitted to the hospital into isolation for shingles; I was in the room next to him for two weeks, and we chatted on the phone every day. I remember he was from Toronto and a fan of the Maple Leafs. I can’t imagine what it was like for John’s family, as I imagined he was perhaps having the same conversations with them as I had with mine – what sort of risk we were taking, and whether that risk would be worth it in the end. Dr. Freedman and Dr. Atkins stopped the trial for a time to find ways to make the trial safer for us.

A year after I completed the trial, I started to see improvements: first I was able to walk without a cane, then get through the day without a nap, then make plans with my friends without needing to cancel. Finally, in 2006, I had regained complete ability, was able to return to work full time and feel more independent than I had in years.

I’m currently living relapse-free, but I’m also living with the after-effects of extreme chemotherapy. My husband and I have had to accept that we will never have children, as the treatment triggered early menopause in my body. I’ve had to get most of my childhood vaccines again, but I need to live without the MMR vaccination. I am very prone to infection, and I developed a blood infection, shingles, and bladder infections after the treatment.

But when I’m asked if it was all worth it, I answer without hesitation: yes.