You may have heard the acronym “NMO” floating around the MS community and wondered what it means. NMO stands for “neuromyelitis optica”, and it is a “demyelinating disease of the central nervous system that affects the optic nerve and spinal cord. The main clinical features of NMO are optic neuritis (inflammation of the optic nerve) and transverse myelitis (inflammation of the spinal cord).”

It’s important to note that multiple sclerosis and NMO are mutually exclusive diseases. While there is no one test to diagnose MS, NMO may be diagnosed with a blood test that detects the hallmark IgG antibody. The test, however, comes with a 30- 40 per cent chance of a false negative result. You do not need a positive IgG test to be diagnosed with NMO—you can still be diagnosed by a skilled clinician if you meet all the other diagnostic criteria. An accurate diagnosis of NMO is vital as some MS treatments have been reported to worsen NMO. 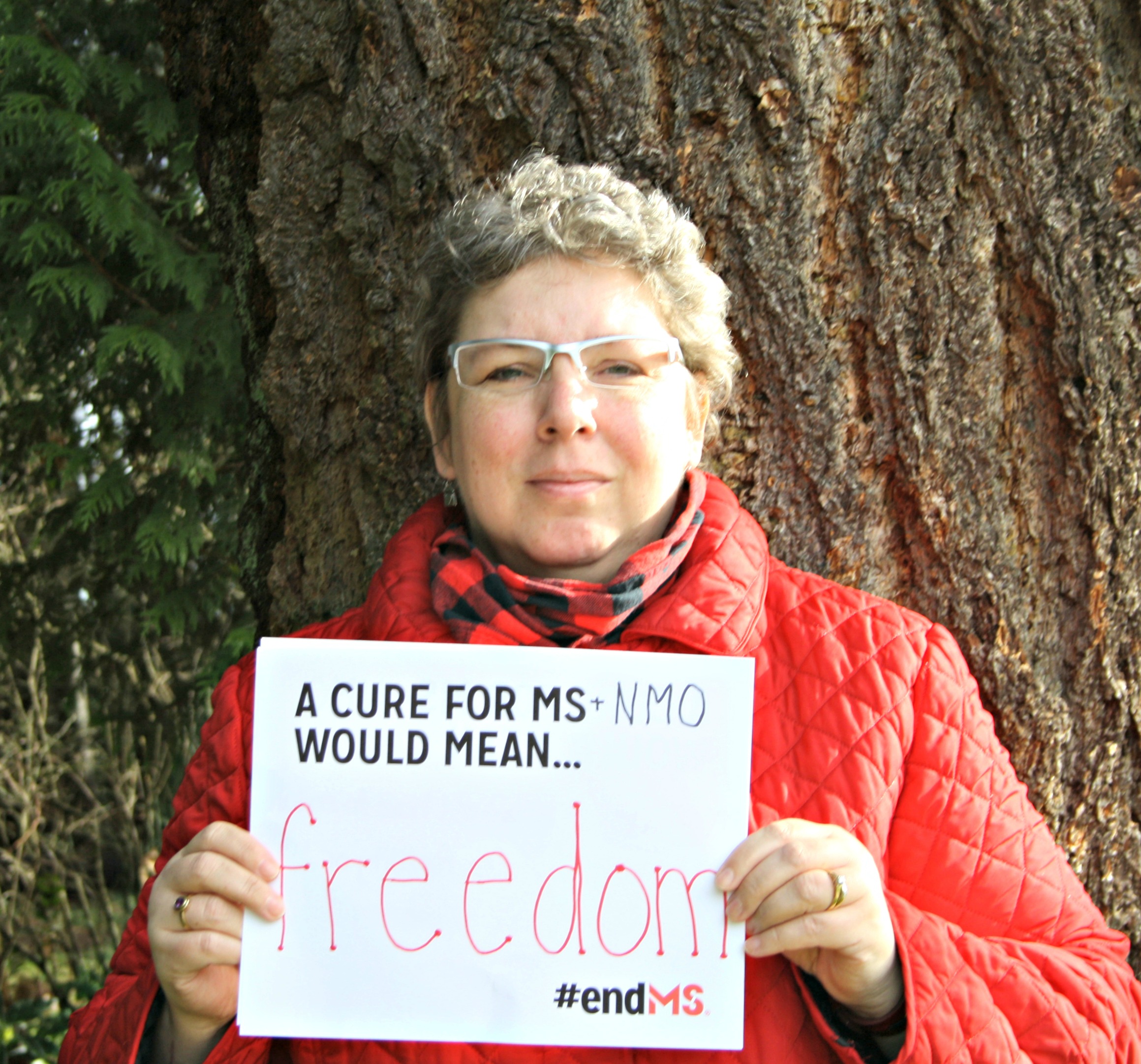 I was diagnosed with MS in 2007. At the time, my neurologist thought my MRI was indicative of NMO and tested me for the disease. The test came back negative. In 2007, however, the NMO test was only two years old, so medical professionals didn’t know about the possibility of a false negative result and I was officially diagnosed with MS. Over the next five years, I tried numerous MS treatments in an attempt to ward off my MS attacks. Nothing worked.

In late November 2012 I experienced four bouts of optic neuritis, which led to another NMO test. While I waited for the results, the University of British Columbia hosted their first NMO Patient Day. I decided to attend because I needed answers. After spending the day listening to people living with NMO talk about their experiences and symptoms, it became clear that I really needed to consult with an NMO specialist.

When my second NMO test came back negative I made an appointment with an NMO specialist at UBC. After reviewing my complete medical history, my diagnosis was amended to NMO.

So how am I coping with living with NMO? First, I am connected to an amazing group of women through the MS Society Lower Mainland Chapter’s Young Persons with MS support group that I joined when I was first diagnosed with MS. They have been with me through thick and thin and did not want me to leave the group when my diagnosis was amended. They have been instrumental in my ability to live well with NMO.

Second, I joined an active NMO Facebook group after my re-diagnosis in 2012. Because NMO is so rare, people living with NMO from around the world have created an online community to offer each other support. The group is an invaluable resource when I have a question or concern, and it’s also allowed me to connect with my local NMO community.

Personally, I have found it immensely helpful to use my skills and experience to advocate and educate others about NMO. If I have to live with this rare disease, then I want to make it count for something. Awareness is everything.

This is a hopeful time for people living with NMO. Six years ago, there were zero clinical trials for NMO. Thanks to the tireless advocacy of the Guthy-Jackson Charitable Foundation, there are now three with a fourth one in the works. For a rare disease, that is AMAZING. Canada has also joined the CIRCLES study, which allows NMO patients at the UBC MS/NMO clinic to donate blood to a biorepository. This ensures that NMO researchers have access to blood samples in their search for a cure. The MS Society has also included Canadians with NMO within the community they serve.

It’s so comforting to know we’re in this together—because together, we’re stronger.