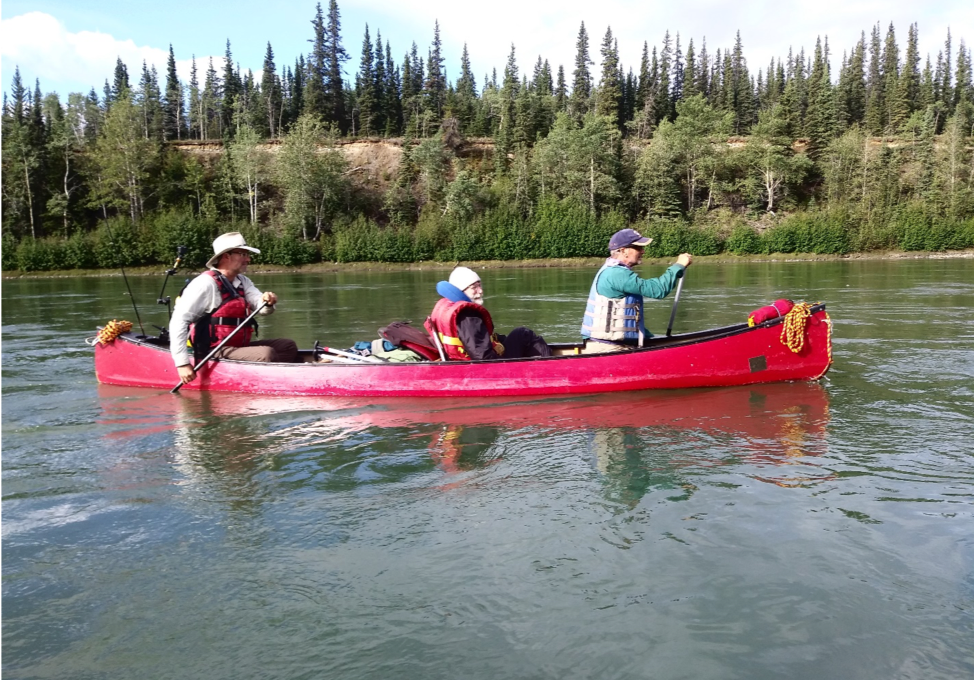 Dave has explored parts of our country that few Canadians ever see. He has canoed past sand dunes along the southern shore of Lake Athabasca and up to Wilberforce Falls, the highest waterfalls north of the Arctic Circle. On his northern trips Dave has seen caribou, grizzlies, bald eagles and awe-inspiring wilderness. Last August, Dave took an eight-day canoe trip to the Yukon in the region made famous as a route for miners travelling to the Klondike Gold Rush. It was his first time in a canoe in six years since he had developed multiple sclerosis (MS) symptoms.

Dave first noticed those symptoms in the fall of 2012 while he was teaching high school in Prince Albert, Saskatchewan.

“I’m a shop teacher, a carpenter by trade, and I was supervising students building a house for Habitat for Humanity when I started limping and it got steadily worse. In the spring of 2013, I was canoeing with the Outdoor Ed class and my wife had to go in the stern of the canoe because I couldn’t paddle anymore. Then and there I knew something was wrong. I finally got diagnosed in 2014 with primary-progressive MS.”

When Dave was diagnosed, he thought his canoeing days were over, until last summer when his best friend and canoeing partner of over 30 years, Jack, phoned him with an idea: “How about a trip on the Big Salmon River starting east of Whitehorse and ending at Carmacks on the Yukon River?”

“I immediately had doubts about whether I could do this, because I couldn’t carry gear around rapids [portaging] and couldn’t paddle,” says Dave. Jack was undeterred. He’d chosen a route with no portages or white water and told Dave he could sit in the middle of the canoe and take pictures.

Jack introduced Dave to to the sport in 1986 when they were both in the College of Education at the University of Saskatchewan. Dave, who was married in the summer of ’87, remembers his honeymoon was a canoe trip with Jack, and without his wife. “She was a very special woman indeed! Our plan, when we retired, was to go canoeing for more than two weeks at a time. However, she got sick and then I got sick, so we didn’t get to do any of that.”

Seeing Dave lose his ability to do things he previously enjoyed, Jack didn’t want Dave to lose canoeing as well. Jack had convinced Dave to take a chance on his first canoe trip three decades ago, and he convinced him again.

“On this trip, I felt like I did on my first trip, not knowing what to expect. But this time it was because of my MS,” says Dave. “Everything would be new, from staying warm in the canoe, to going to the bathroom.” Jack, who often takes his son who lives with cerebral palsy canoeing, fishing and snowmobiling, had some ideas for helping Dave. An occupational therapist friend of the family also provided help.

The trip was different than previous ones because of Dave’s MS. “I used to cook all the meals on trips; especially when I went with my wife, but I couldn’t do that any more. I also couldn’t stand for very long, so I had a chair that I sat in while in the canoe and around the campfire. Getting in and out of that chair was a challenge but other than that, things went really well.”

Dave has already thought of solutions for some of the challenges he experienced trying to stay warm and dry on the trip. He knows that without experienced partners willing to do the paddling and help him in and out of the canoe, he wouldn’t have been able to experience a canoe trip again. Dave is looking forward to more trips out on the water in the wilderness of northern Canada, canoeing and camping with friends.

“One thing about having MS is that I won’t be able to take my grandkids on trips like this, but I’ve taught my son, so he’ll be able to pass along his knowledge to his family.” Dave may not be physically able to teach his youngest grandchildren, but he will certainly inspire them with his love of canoeing and the great outdoors, and his determination to find new ways to engage in old passions while living with progressive MS.