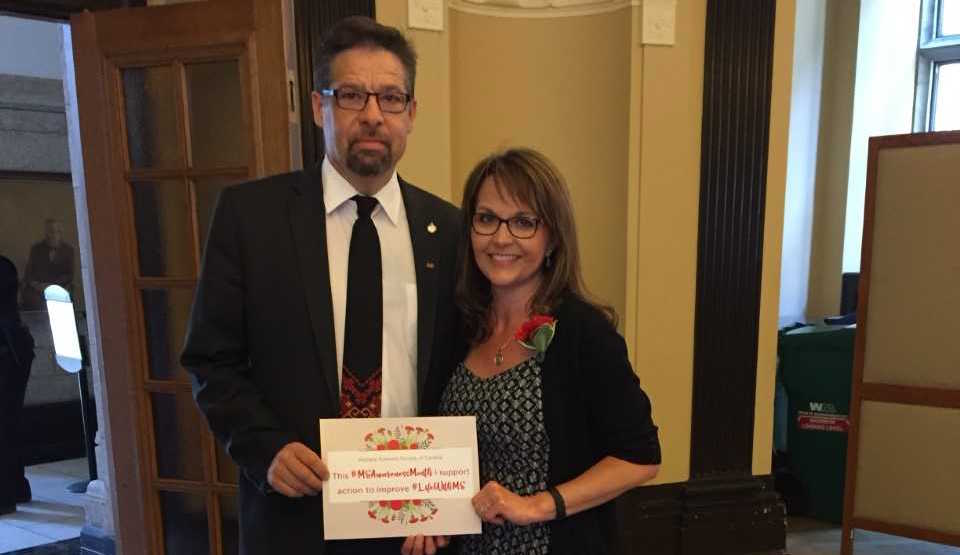 We would all move mountains for the one’s we love. Fort McMurray-Cold Lake Member of Parliament, David Yurdiga, wanted his wife’s story heard and recognized. This was the launching ground for private members’ motion M-192, Episodic Disabilities.

“I was in my 30s when I was diagnosed [with multiple sclerosis]. I had a bustling and busy life being a working mom so the diagnosis was very overwhelming,” says Kathy Yurdiga. “We didn’t know how the disease would affect me. Would I get the use of my arm back? Would I be in a wheelchair in a few years? Would I be able to return to work? The uncertainty was scary.”

These sentiments have long been expressed by the MS community. With Canada having one of the highest rates of MS in the world, the need for action was evident to David.

“Over the years we’ve had many calls from people with episodic disabilities such as MS and epilepsy who were looking for assistance,” says MP Yurdiga. “These people were denied Employment Insurance, Canada Pension Plan and disability benefits due to the on-and-off nature of their disease. It really highlighted the gaps in our legislation and policies and showed the need for more flexibility. I knew I had to address it.”

“The response I got from my fellow MPs, Conservative, Liberal and NDP alike, was overwhelmingly positive,” says MP Yurdiga. “Everyone agreed that the current system didn’t work for people with episodic disabilities and there was unanimous support in favour of the motion. The MS Society was also instrumental in helping us craft the bill and raising awareness. They were a tremendous advocate and encouraged Canadians to share their stories, which helped us see the weaknesses in our system.”

With nearly 20 witnesses taking to the podium to share their stories, the Standing Committee on Human Resources, Skills and Social Development and the Status of Persons with Disabilities (HUMA) heard people from Epilepsy Ontario, Neurological Health Charities Canada, Realize, and the MS Society of Canada. They shared their personal stories of the need to expand the understanding of disability presently embedded in many areas of the federal government’s programs, policies, services and laws to include episodic experiences. Their testimonies also emphasized the desire of people with episodic disabilities to remain active and productive in the workforce while recognizing that they need more support during periods when their disability may prevent them from working.

In addition to the testimonials more than 5,200 letters were sent to Members of Parliament in support of the motion.

“I’m thrilled that this motion took off the way it did. It really had legs of its own,” says MP Yurdiga. “Everyone was on board. This was truly a team effort, and everyone involved should be credited with making it happen.”

The report Taking Action: Improving the Lives of Canadians Living with Episodic Disabilities was tabled in the House of Commons on Friday, March 22, 2019 by the Chair of the HUMA Committee, MP Bryan May.

For more on the process and understanding of private members’ motion M-192 check out the blog post – Private Members’ Motion M-192, Taking Action: Improving the Lives of Canadians Living with Episodic Disabilities.