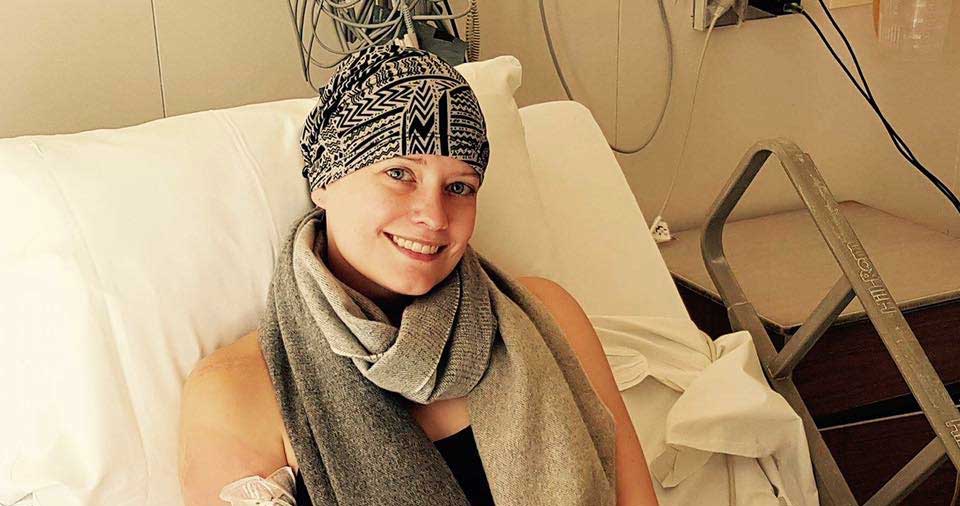 “If I ever write a book, it’s going to be called Unapologetic because that is what MS has taught me to be,” Brooke Robinson says. “I don’t need to apologize because I rushed out of a meeting to go to the bathroom. If it takes me forever to get down the stairs, then so be it. This is my life now.”

Brooke’s story starts in 2015. She was in the throes of a successful career in communications — young, healthy, and extremely active. The first signs of multiple sclerosis (MS) began with symptoms related to bowel and bladder incontinence. Her doctor assured her that it was Irritable Bowel Syndrome (IBS). She was a 26-year-old woman and she was running to the bathroom with legs that were failing her.

“My story was very much like everyone else,” Brooke explains. “I spent my childhood playing competitive sports and graduated from Western University with an honours degree in History. Then I was diagnosed with MS and I had to change my path in life.”

The cause of MS is still unknown. However, more than 77,000 are living with an MS diagnosis in Canada alone. “There are many potential triggers for MS, but somewhere along the way, the immune system begins to attack the central nervous system (CNS) that consists of the brain and spinal cord,” explains Brooke.  “The attacks leave scarring on the CNS, which causes an electrical short that messes with your neural pathways and prevents signals from the brain and spinal cord from reaching the body.” For Brooke, all of the scarring was on her lower spine, which caused the bladder and bowel incontinence. Then, she quickly began to lose her ability to walk. 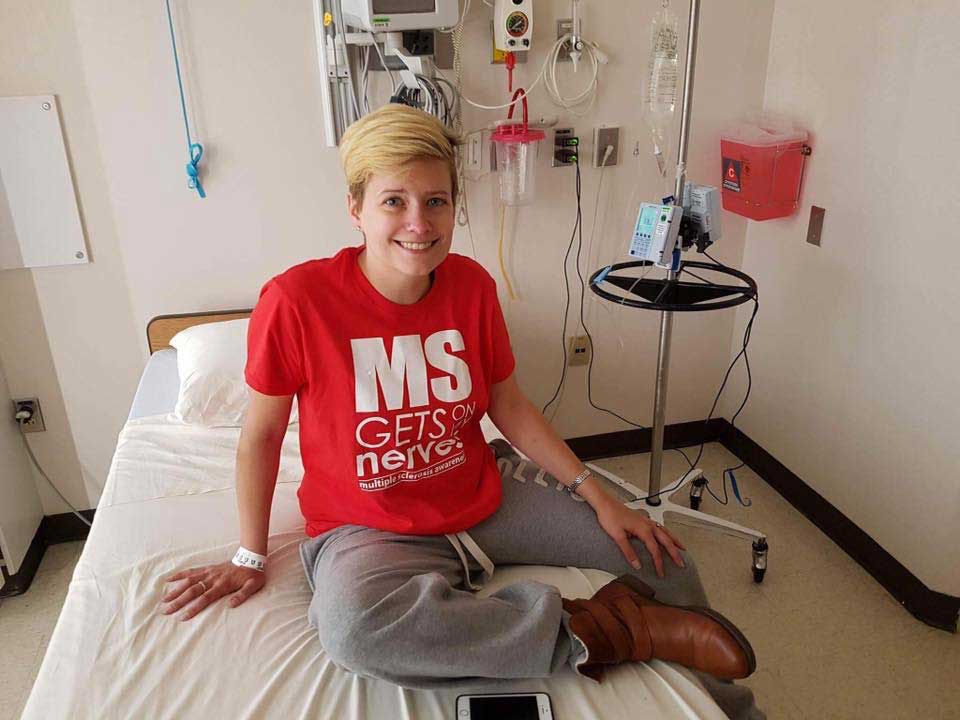 Brooke was diagnosed with MS in April 2015. Her husband (fiancé at the time), Dave, proposed four months later. By October, her disease rapidly progressed, and she was walking with a cane.

It was a chance encounter in June 2016, that changed the course of Brooke’s disease. While walking down the street one day, cane in hand, she passed by a man on a scooter. He looked at her cane and asked, “Is that permanent?”

“To me, the whole thing was a bit odd,” Brooke says, “Most people just assume I’ve had a hip surgery. I told him that I actually had MS and he said, ‘Me too!’. We stood there for almost 40 minutes talking, and he told me about a revolutionary stem-cell trial that was taking place in Ottawa, called the Bone Marrow Transplantation Trial (BMT). Drs. Mark Freedman and Harold Atkins were using chemotherapy to wipe out patients’ immune systems, and then successfully rebuilding them with their own healthy stem cells.

“I chased down Dr. Mark Freedman and it turns out my neurologist actually went to school with him, so the referral was seamless.”

Dr. Freedman is an expert neurologist in MS who approved Brooke as a candidate for the treatment and referred her to Dr. Harold Atkins. This procedure is for individuals that are progressing in their MS incredibly fast, and feel this treatment is their very last option while still being healthy enough to recover from such an intense procedure.

The trial required two parts. Part one was collection of Brooke’s stem cells and part two was multiple days of chemotherapy, followed by the return of her stem cells that had been collected in the first part.

“I was mentally prepared for the trial,” she says, “I had no options left, but I had so many great people in my life and I was focused on curing my MS. This was it.”

So, in October 2016, a year and a half after her initial diagnosis, Brooke started the trial. In December, Dave took a buyout from his 14-year career at the National Post to care for Brooke and the two headed to an Airbnb rental in Ottawa for the next three months.

“One of the first things they do is put a peripherally inserted central catheter line in your arm,” Brooke says of the chemotherapy, “They wipe out your entire immune system and then return the collected ‘baby’ stem cells that have no memory of MS.” 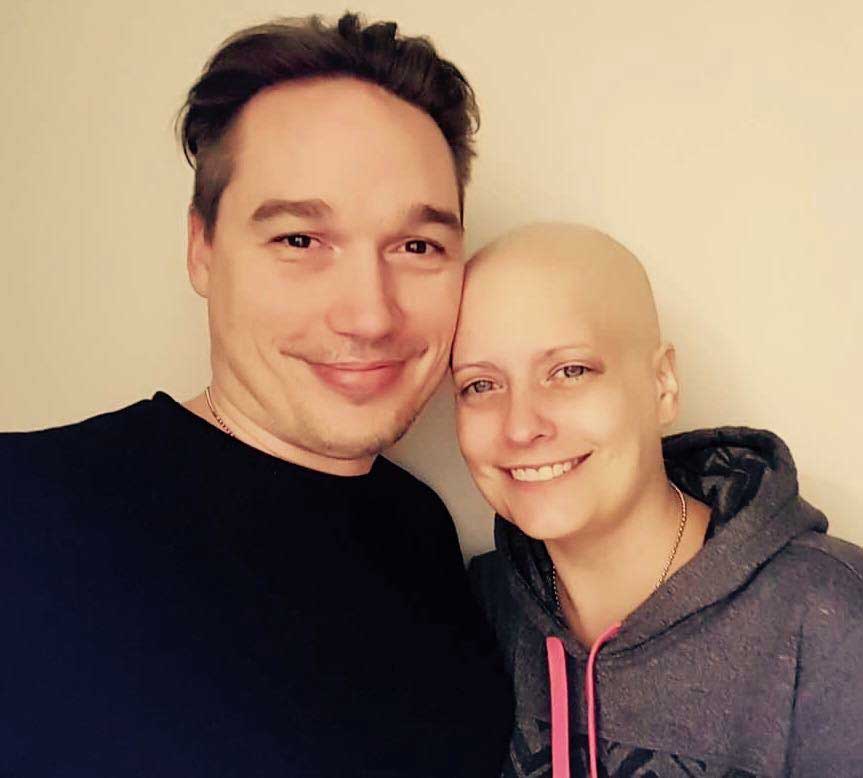 Brooke and her husband days after her chemotherapy.

Brooke lost all of her gorgeous, long blond hair two weeks after her first dose of chemotherapy.

After the chemotherapy, Brooke made a trip to the hospital each day to be monitored. If platelets were down, new platelets would be given to her to ensure that her body was functioning until the immune system had a chance to rebuild. The worst that Brooke felt was like she had a bad case of the flu. She experienced a few really bad days and slept a great deal. As the fatigue wore off and weeks wore on, she found she didn’t need her cane anymore.

It has now been a year and a half since Brooke returned to Toronto and things are getting better for her every day. She has made a return to the gym, with encouragement from her husband, and just last week did something she never thought she would be able to do again: she ran at full speed on the beach near their home.

Before the trial, Brooke was a 6.5 on the Expanded Disability Status Scale (EDSS) – requiring walking aids, and only a few months away from life in a wheelchair. Now she’s a 2 on the scale – living with minimal disability.

Last summer, Brooke met up with the gentleman that saved her life, the guy she met on the street. His own condition had deteriorated, but he was so happy to see her healing. Even though he couldn’t participate in the trial, it symbolized hope.

Brooke says that this trial has changed her attitude on life and given her more than just a new outlook on her MS.

“The fact that I was staring down living the rest of my life in a wheelchair makes me appreciate the fact that I can drive three hours to my parents’ home on my own. Those years before the treatment are now a tiny blip in my story,” Brooke says.

“The other day I was getting the groceries on my own, because my husband was busy doing some work. I came inside carrying all six bags of groceries. I was really proud of myself. Three years ago, that wouldn’t have been possible.”

Help change another life today.  To fund more research initiatives that can help Canadians living with MS, please donate to the MS Society today. Your generous donations today can help another life the same way you helped Brooke.