I’m Lizelle Mendoza: nursing student, Winnipegger, mover and shaker, and someone who has been living with multiple sclerosis for most of my life. I’m also an MS Ambassador, MS Walk participant, MS support group member – and now I can add A&W Cruisin’ to end MS Champion to that list.

Opens email, named national #CruisintoEndMS ambassador ? thank you so much @MSSocietyCanada @mssocietyMB I’m so humbled by all your support!

Remember the MEsenchymal Stem cell therapy for CAnadian MS patients (MESCAMS) announcement last January? I spoke at the Winnipeg press conference announcing the new MS specific stem cell study. For me the stem cell trial represents a step towards a cure for MS—and not just a little step, but a big, important step on the path to ending the disease.

So it makes sense that I’m speaking out again – this time for A&W Cruisin’ to end MS; A&W contributed $1 million to the MESCAMS study, on top of the $6.5 million raised through the campaign. On August 27, $1 from every Teen Burger sold will go toward MS research and services. I’m thanking you in advance for making your way out that day to eat a Teen Burger, buy a cutout for the restaurant wall, or even drop some change into a donation mug! So how did my journey with MS start?

When I was 11, I woke up one day with a large black spot in my eye. That was just the beginning. For many years I had no idea what was wrong with me. My blurry vision stopped me from playing sports and prevented me from trying new things because I never knew when my vision would blur. My symptoms worsened to the point of having numbness in my leg. Finally, when I turned 18, my doctors gave me a diagnosis: relapsing-remitting MS.

The moment someone said, “You have MS”, I thought my life was over. I was 18—my life should have felt like it was only beginning, but for me it felt like the end. I am a Winnipegger, and my parents emigrated from the Philippines. MS is not known to be very common in Asian cultures, and my family had a large learning curve as we came to understand what this disease meant for us. At first I felt tied down. Everyone, myself included, said, “You can’t do this,” “You can’t do that.” But as I matured, I learned more about the treatment options available to me and decided to take disease-modifying therapies, which have helped with my symptoms. I feel that I can take control of my life again. 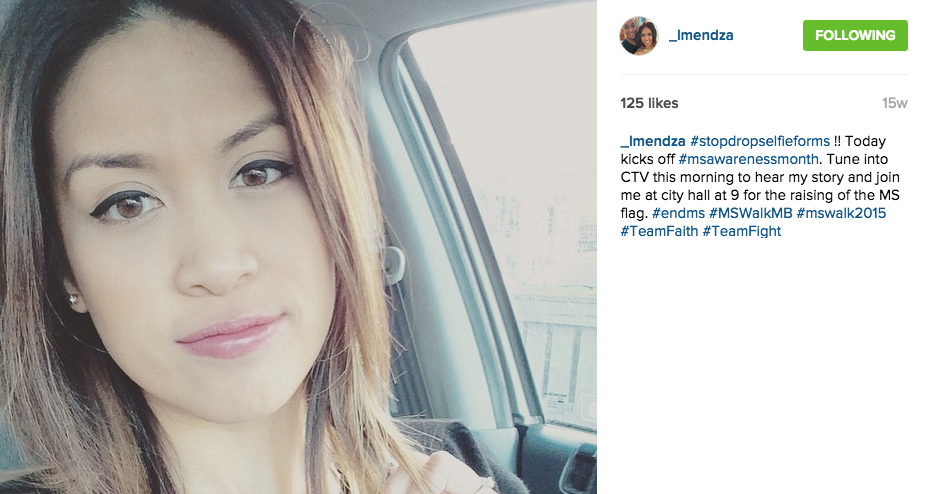 I know that the life I’m living now wouldn’t be possible without the therapies I’m taking—and the therapies I’m taking wouldn’t exist without MS research funding. Now, on August 27, I’ll be travelling across Canada to raise awareness of what it’s like to live with MS to generate support for the A&W Cruisin’ to end MS campaign. I’m sure you’ll also be able to catch me on Instagram eating a Teen Burger or two (or three or four?)—feel free to mention me in your posts that day and use the hashtag #endMS! I’ll be looking through the feed at the end of the day, and I want to see all your faces. Thank you, again, for your support. It means the world for all of us who live with MS.